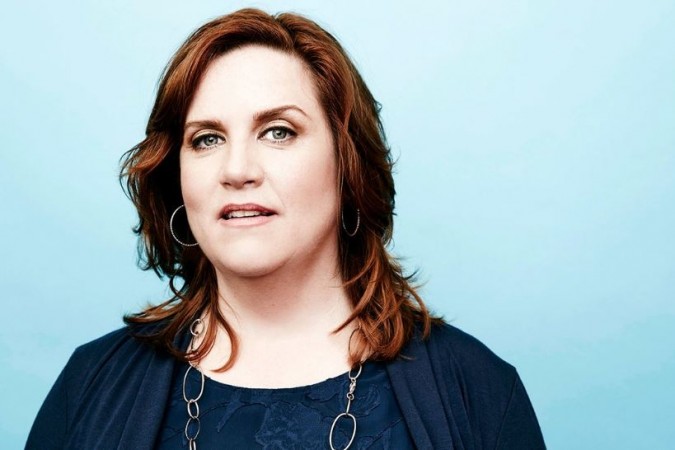 Donna Lynne Champlin is an American actress, dancer, and singer who is best known for playing Paula Proctor on The CW comedy-drama series Crazy Ex-Girlfriend. She participated in theatre productions, various lessons, and national and international competitions throughout her childhood, in voice, flute, theatre piano, and dance. She is active in her career since 1993.

She was born on January 21, 1971, in Rochester, New York, USA. She is currently 48 years old (as of 2019). She was active in various lessons, national and international competitions since her childhood. Also, she used to play piano and flute in her childhood. She started off as a performer at the age of 4.

She attended Carnegie Mellon University and studied Musical Theatre and graduated with a Bachelor of Fine Arts degree in 1993. After that, she joined Oxford University on the Advanced Acting Scholarship and was trained in Shakespeare and Chekhov.

She debuted her theatrical film appearance as a babysitter in the horror mystery thriller adaptation of the Stephen King’s novel of the same name, The Dark Half, in 1993.

She debuted credited theatrical film appearance in the drama movie, A Secret Promise a.k.a My Father’s Will, in 2009 as Sandra.

Performing several songs, such as Trapped in a Car with Someone You Don’t Want to Be Trapped in a Car With, I’ve Always Never Believed in You, The Cringe, This Song Goes in a Loop Dee Loop, After Everything I’ve Done For You, California Christmastime Face Your Fears, Flooded with Justice, What a Rush to Be a Bride, The Miracle of Birth, No One Else Is Singing My Song, Buttload of Cats, The Group Mind Has Decided You’re in Love, Let’s Generalize About Men, and Back in Action, in various episodes of the musical comedy series, Crazy Ex-Girlfriend.

She was awarded an OBIE Award for her brilliant performance as Cora Flood in the production of The Dark at the Top of the Stairs in 2007.

Moreover, she has also worked as a freelance writer for Comedy Central and is a certified reflexologist.

Similarly, she is interested in the fields of metaphysics, mystic history, and philosophy.

She was born to a scientist father and technical writer mother. Her mother’s name is Dorothy Champlin but her father’s name is unknown. She has an older brother named Mike with whom she was raised.

Donna is a married woman. She has been married to actor Andrew Arrow since 2010. The couple is blessed with a son named Charlie Arrow who can often be seen in Donna’s Instagram uploads. The family is currently residing together and they are living happily with each other.

The actress must have accumulated a huge sum of money from her career however, she has not revealed her exact net worth, salary, and income.

The beautiful actress stands a height of 5 ft. 4 inches and weighs 60 kg. Her hair color is dark brown hair and green eyes. She has a wide forehead and jolly personality. She is also active on Facebook, Instagram, Twitter, etc.